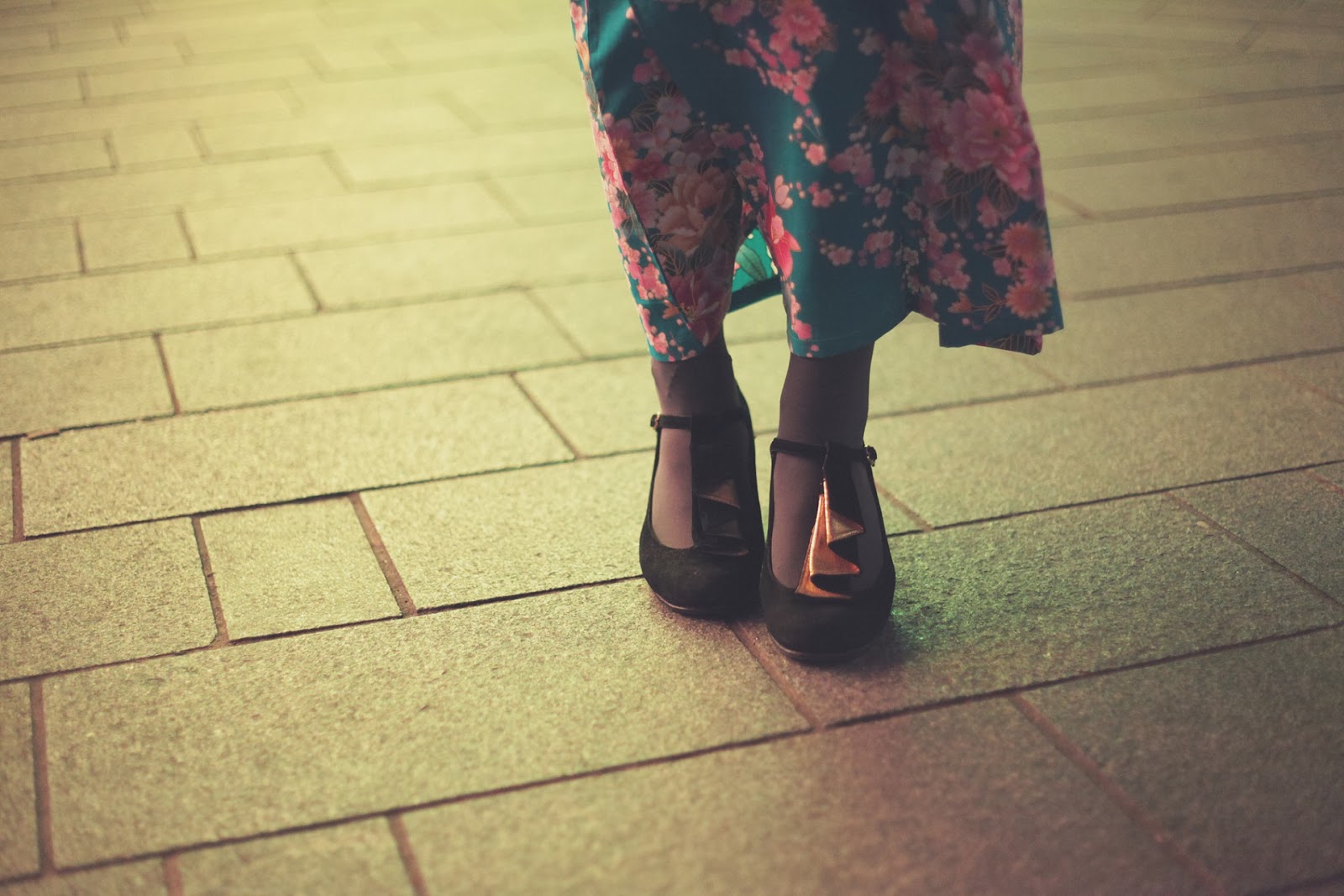 Hello my darlings, how has the end of February been for you? Following on the ~Part 1~ 'How-To' and  ~Part 2~  Braserie Zedel posts on the Modan Garu (Japanese version of modern girl or flapper in the 1920s), I thought I would go on a bit more about how it all came about to tie in any loose ends....so its time to unearth a little article I did for 'Hey Doll!' Vintage Magazine some time ago! I found it really interesting how different parts of the world incorporated some Western trends into their own lives or customs throughout time, almost creating a complete new unique style at the time and took fashion into their own hands.A fascinating tie I was inspired to re-capture when I got myself a very first Yukata (summer cotton Kimono) on my trip to Japan last year....and hence my very own  Modan Garu inspired look captured by Walking In May's lovely photographer Caroline Opacic (photos below). You can catch up on 'Hey Doll' here or read the article below:


The 1920s...a time of flowing decadence and renewed freedom witnessed by growing speakeasies under prohibition laws and dress hems climbed above the knees in America as well as the UK. Unknown to some...the jazz, glitz and glamour had travelled across the seas through a variety of imported goods and written publications to spark a new trend in equally gangster ruled Eastern cities like Shanghai. The West sought inspiration from the Eastern luxurious brocades of goldens or reds for shawls or kimono jackets, and elaborate headdress of feathered jewel turbans or sisal zig-zagged cloche hats. But the East began to awaken an interest in foreign culture and styles through industrialisation and trade, which created more opportunities with the new emerging Western department stores, factories and giant steaming ships travelling to far off lands.

In Japan modernisation was taking place and more women joined the workforce resulting in 80% of the 500 workers being women. New thoughts questioning a woman’s role started spinning in the birth of Modan Garu (modern girl)...Japan’s answer to the flapper girl! By 1921 advertising posters painted girls in kimono matched with distinctive European finger waved hair known as ‘Yohatsu’. The Modan Garu in Japan were empowered with buying power, and seeked clothing that were more practical as well as easier to wear for day to day work. The rich began collecting luxurious Art Deco furniture to decorate their mansions and automobiles to parade across town. The privileged Clara Bow fans who were brave enough, even went as far as cutting their silk long hair into short and fashionable Western bobs, which tradition shunned in earnest. 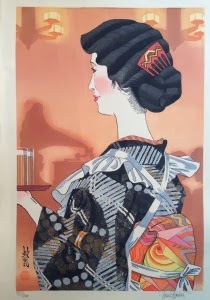 A little further away...China was a newly formed Republic (1912-1949) with a shaky central government and uncertainty dominated through a competing presence of warlords, military and gangsters. It was a time when guns spoke as loudly as the law, and there were so many grey areas to muddle through that surviving no longer was a simple line of following rules. Just like the role they played in society, women in 1920’s China were a mixed existence between the cultural tradition of keeping a conventional home and a foreign modern desire to do more either for themselves or their husbands. The movie ‘Raise the Red Lantern’ by Gong Li may probably give a taste of the intense friction in a roaring 1920s China, but the details of why women dressed the way they did is sometimes overlooked. What made the rich wives match imported Western suit jackets, woolen capelets, short pearl necklaces and finger waved hair to a traditionally Eastern Qipao (Cheongsam) dress? What made women save up months on end just to buy a bottle of French imported perfume at the rich frequented department store?  The blend of Western imported garments, accessories or furniture into traditional Chinese lives was a game for the immensely rich and powerful, as it was not only about status but a bold step towards Western ideas. Making 1920s Shanghai an alluring Paris of Asia in every sense, and drawing in a new generation of educated elites as well as Europeans...into a city that sparkled through the night with an uproar of racy clubs with dancing girls, alcohol and clashing big bands. 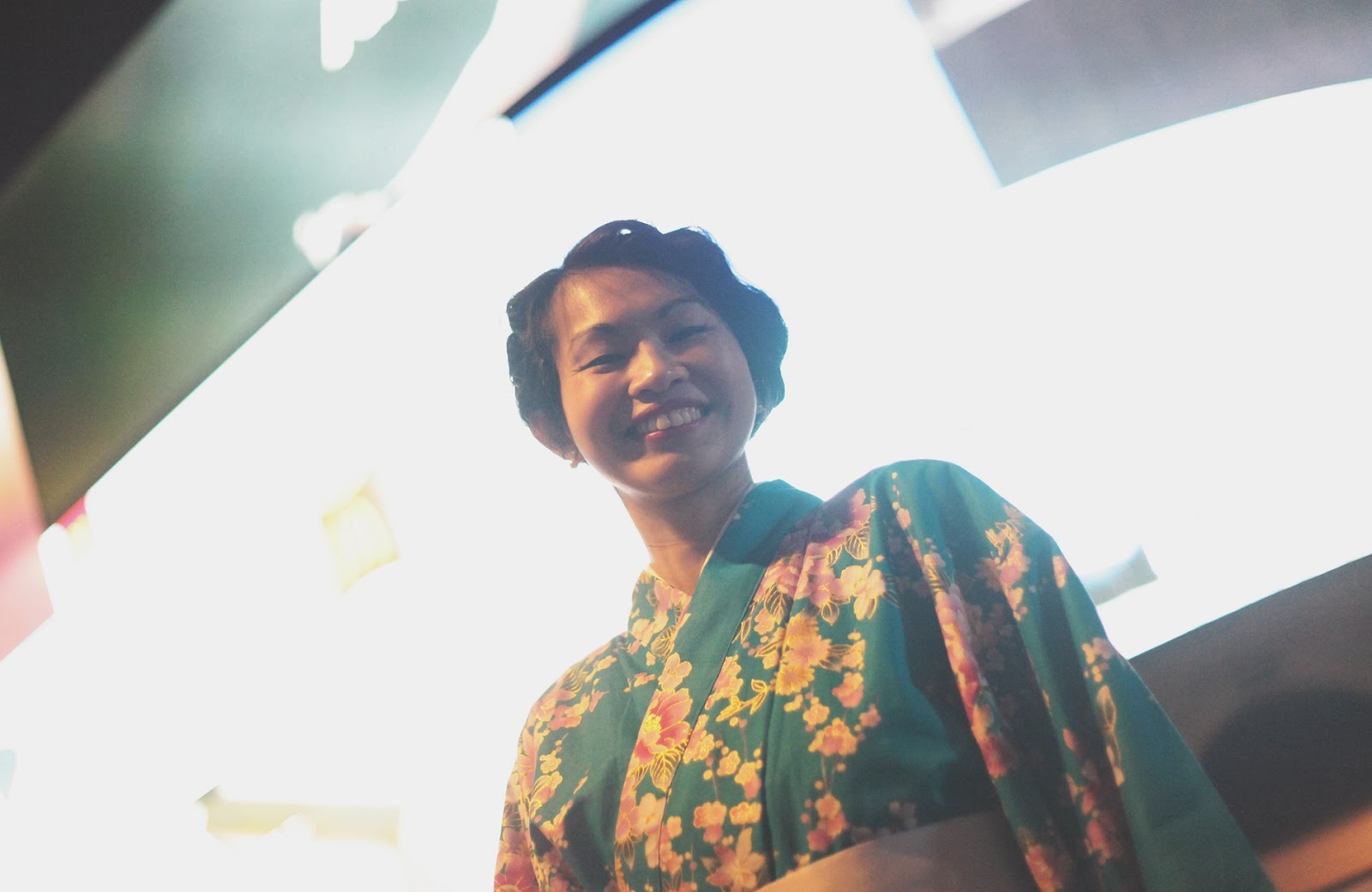 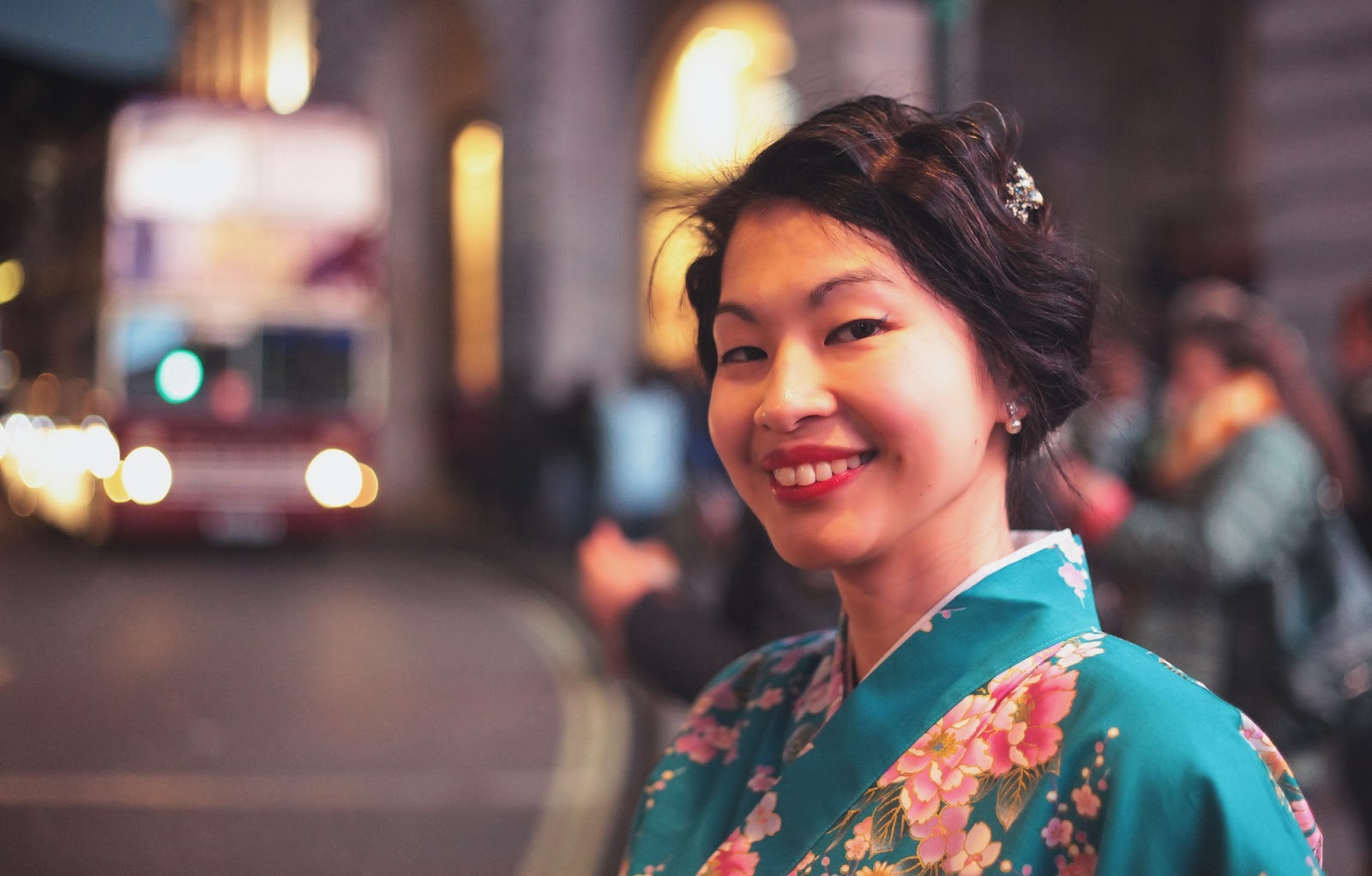 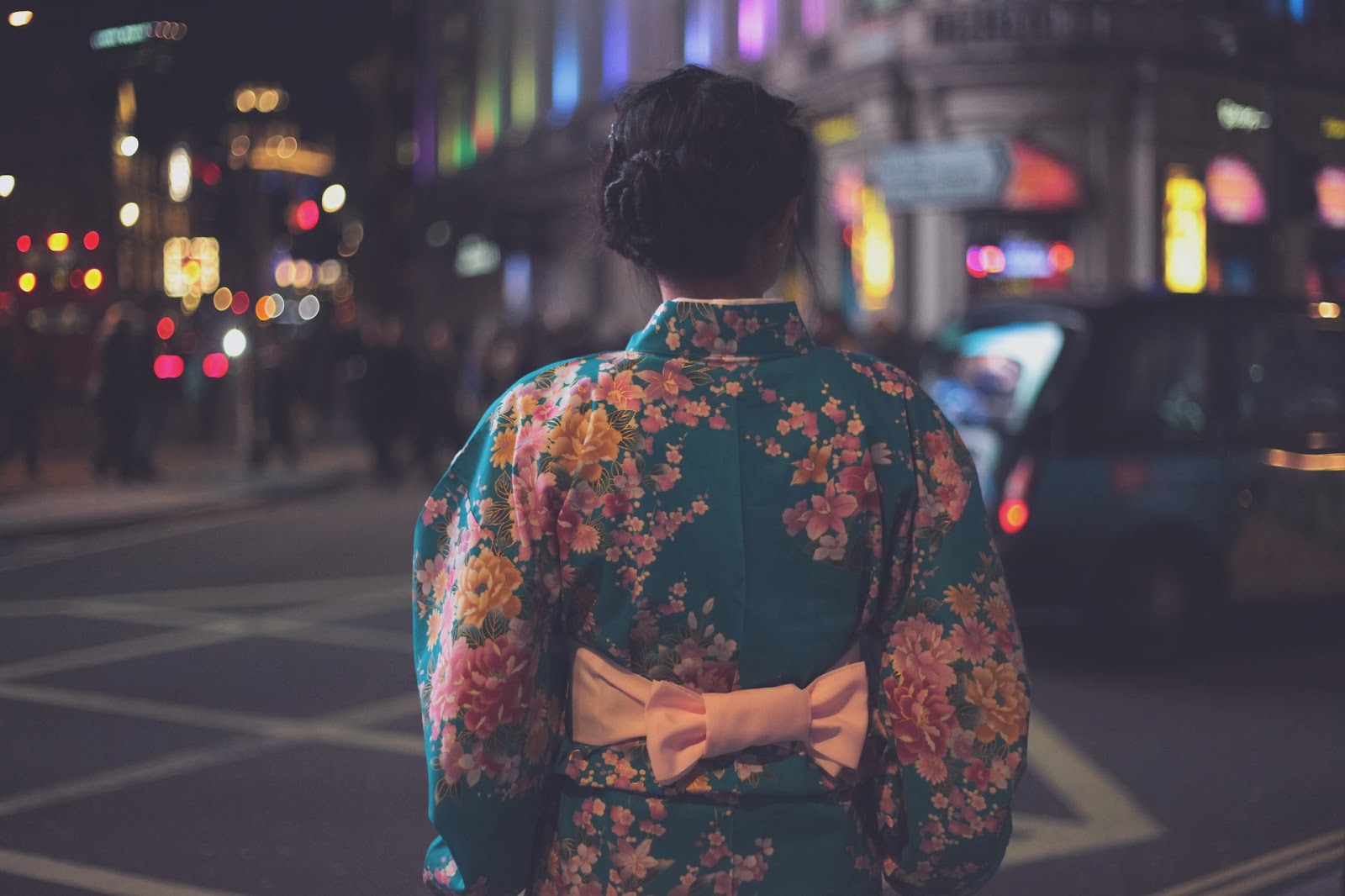 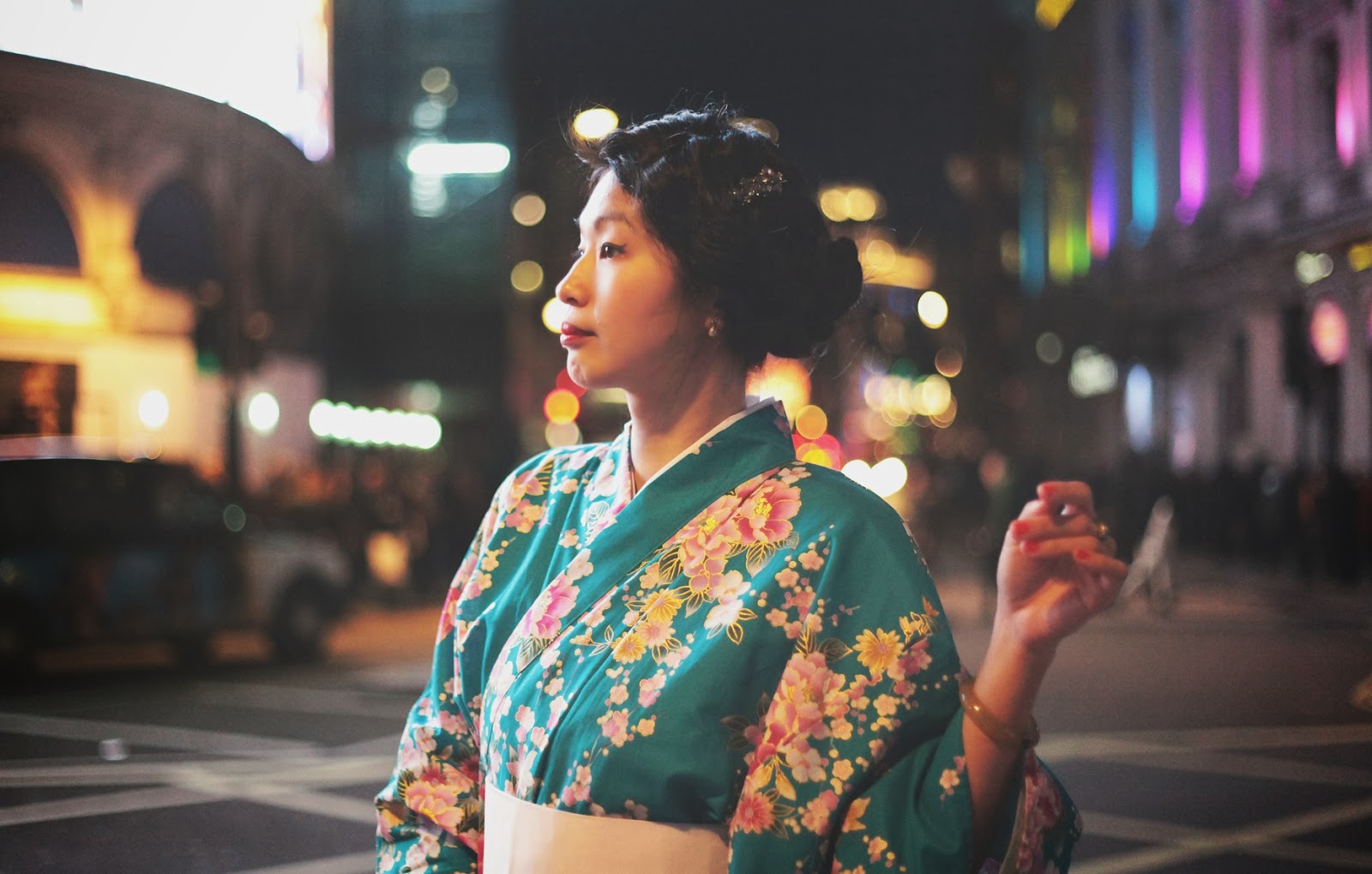 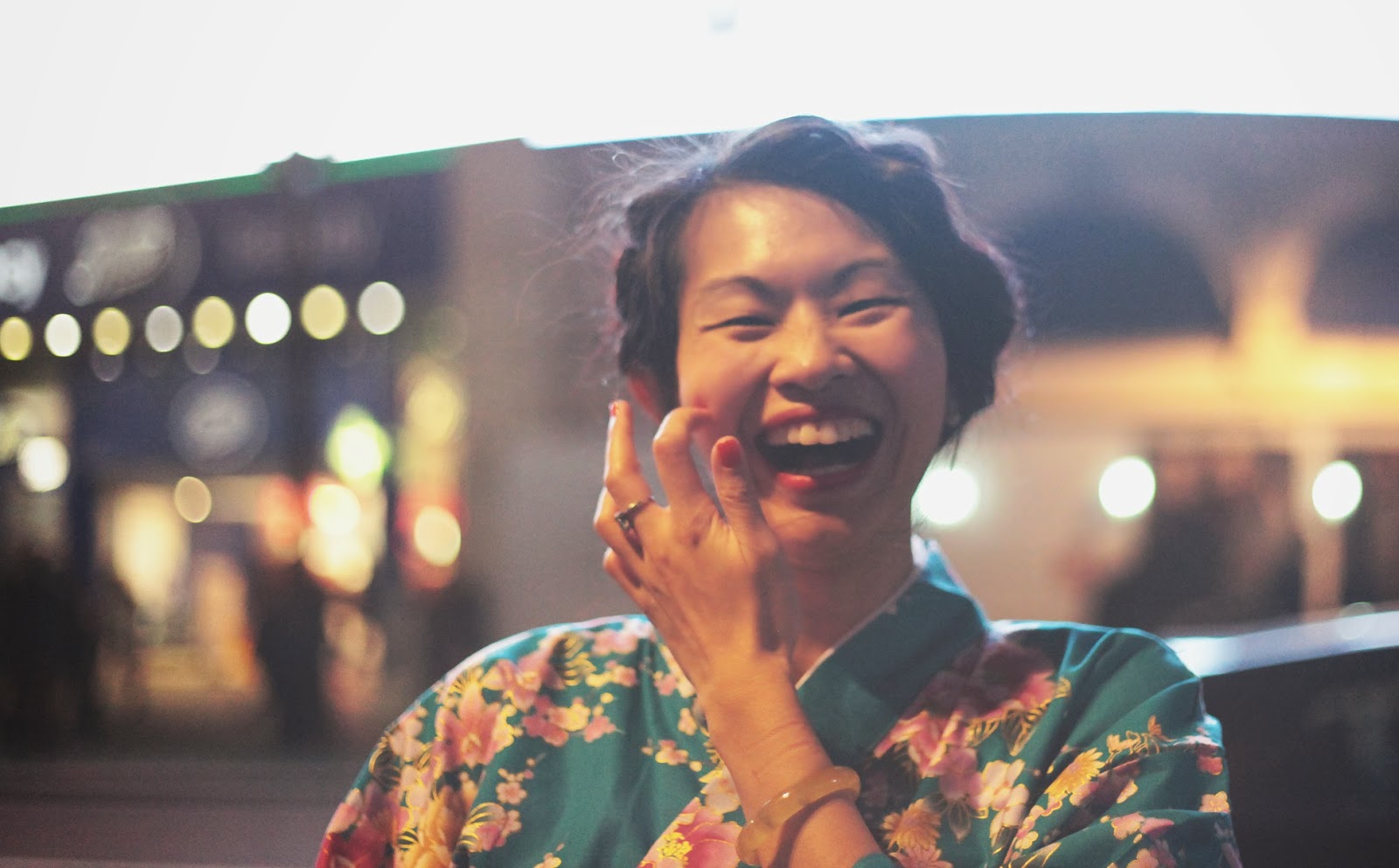 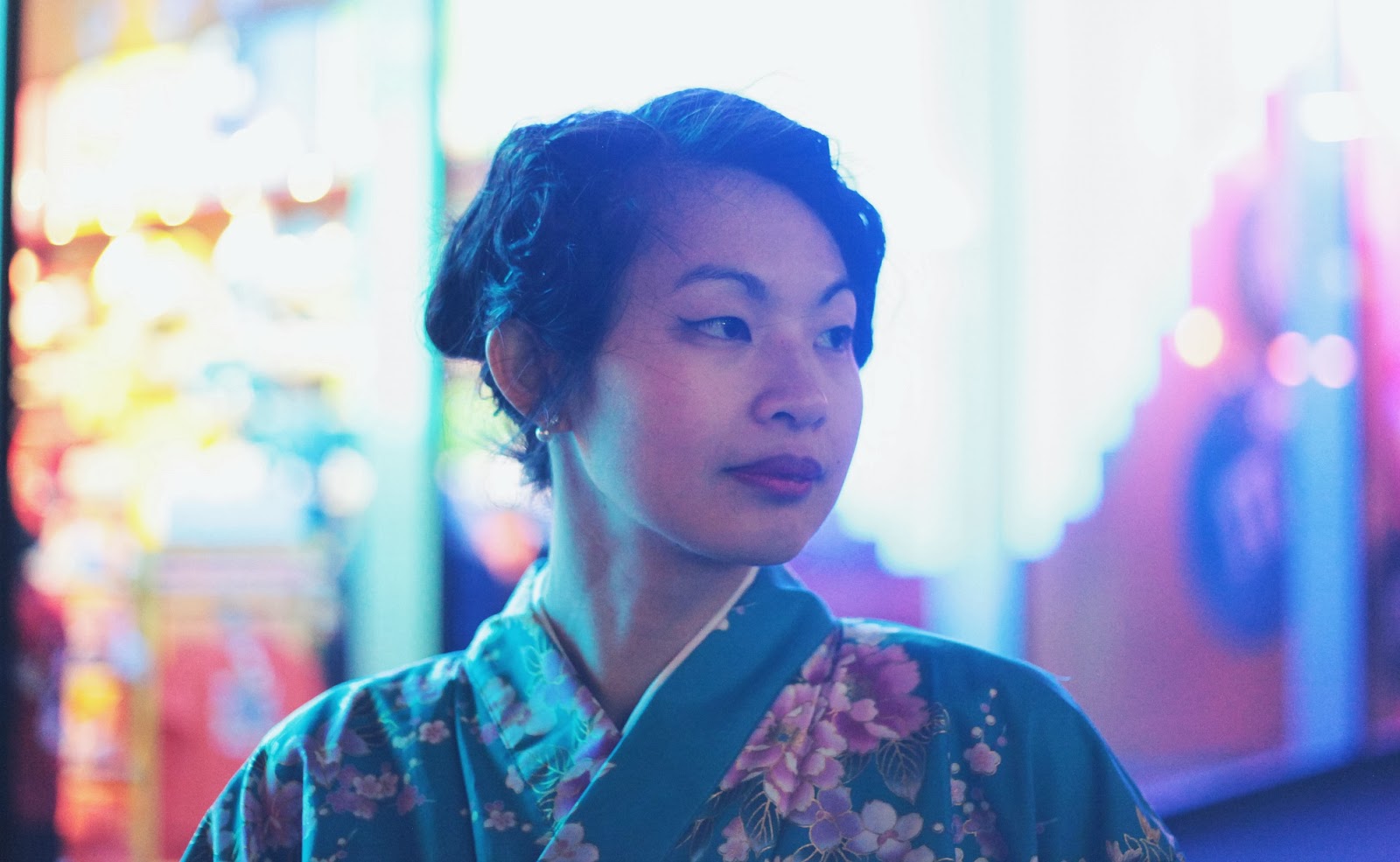 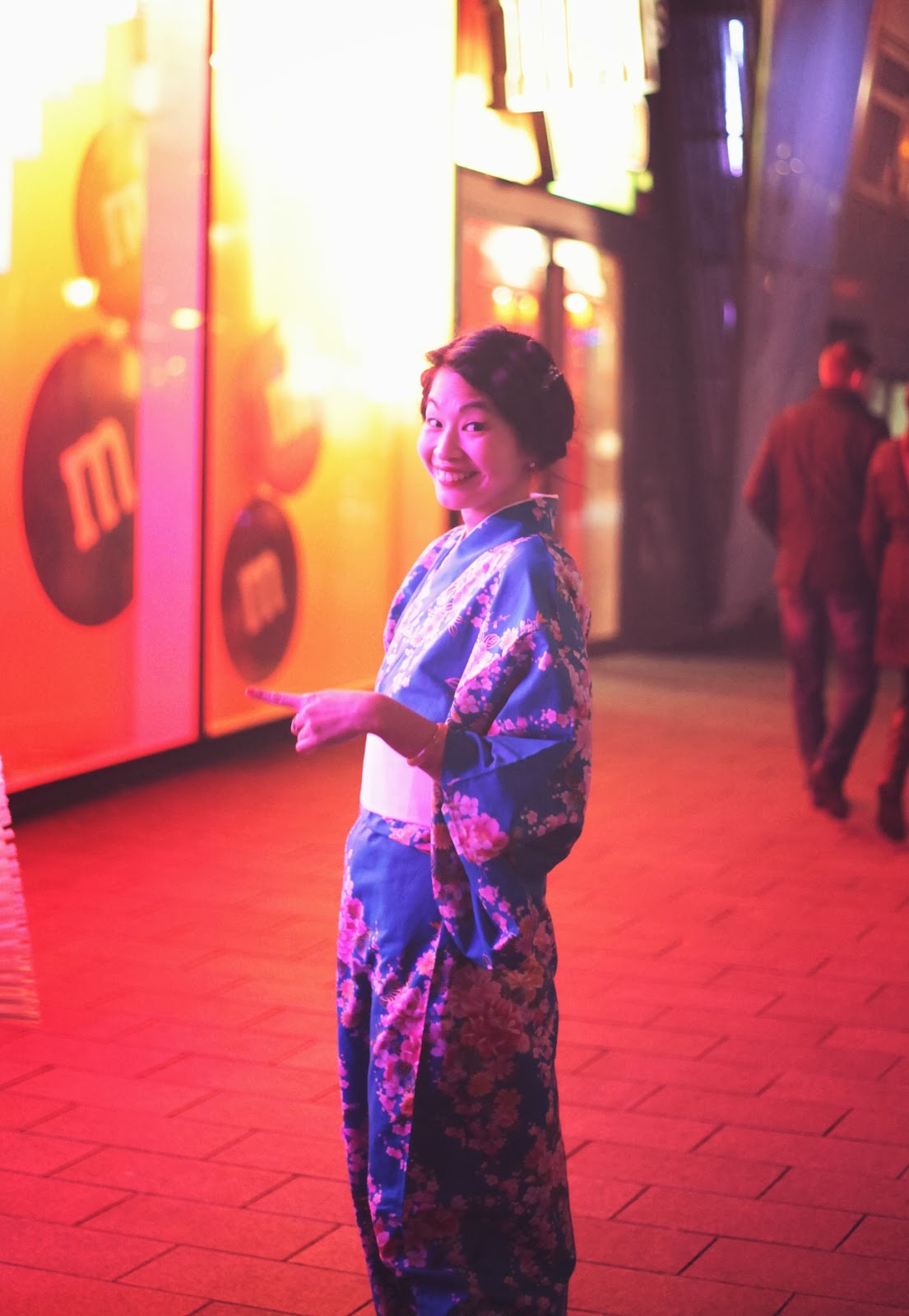 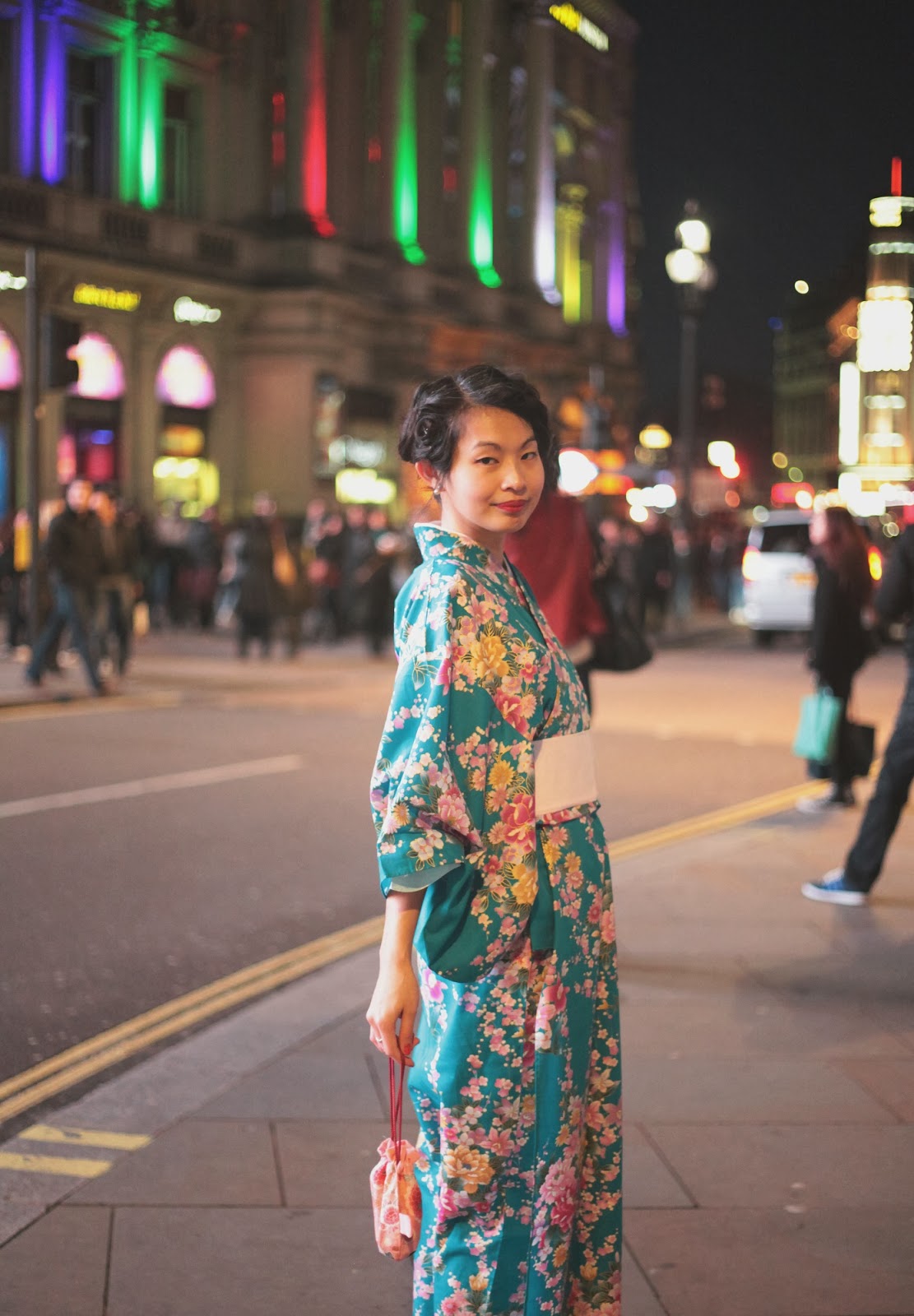 As we roamed through Regents Street towards Picadilly turning an averted disregard to any staring eyes or questions from strangers, we tried to capture the contrast of both East and West in a fusion of photography. What could have been before and what could be now....thoughts churning through my mind. Remembering how...as Naoko dressed me she commented on how beautiful the Yukata was and how the light blue-ish turqoise vividly reminded her of what her Great Grandmother had worn in the 1920s....I smiled in little bits of bliss. Thank you Naoko for dressing me as authentically as possible and allowing me to show my readers how-to do it....thank you Caroline for your amazing talents in photography and taking the time to be with us....also thank you to Rachael my loving vintage friend who discovered the Brasserie Zedel and always exploring vintage adventures with me....I felt gratefully blessed with such fabulous friends. What more could a girl ask for? As I wrap up the final Part 3 to the Modan Garu, I am looking forward to March....more Qipao (Cheongsam) surprises to excitedly unveil...and a beautifully blooming spring. I wish all you lovely darlings a very fabulous 1st of March!
Until the next time, 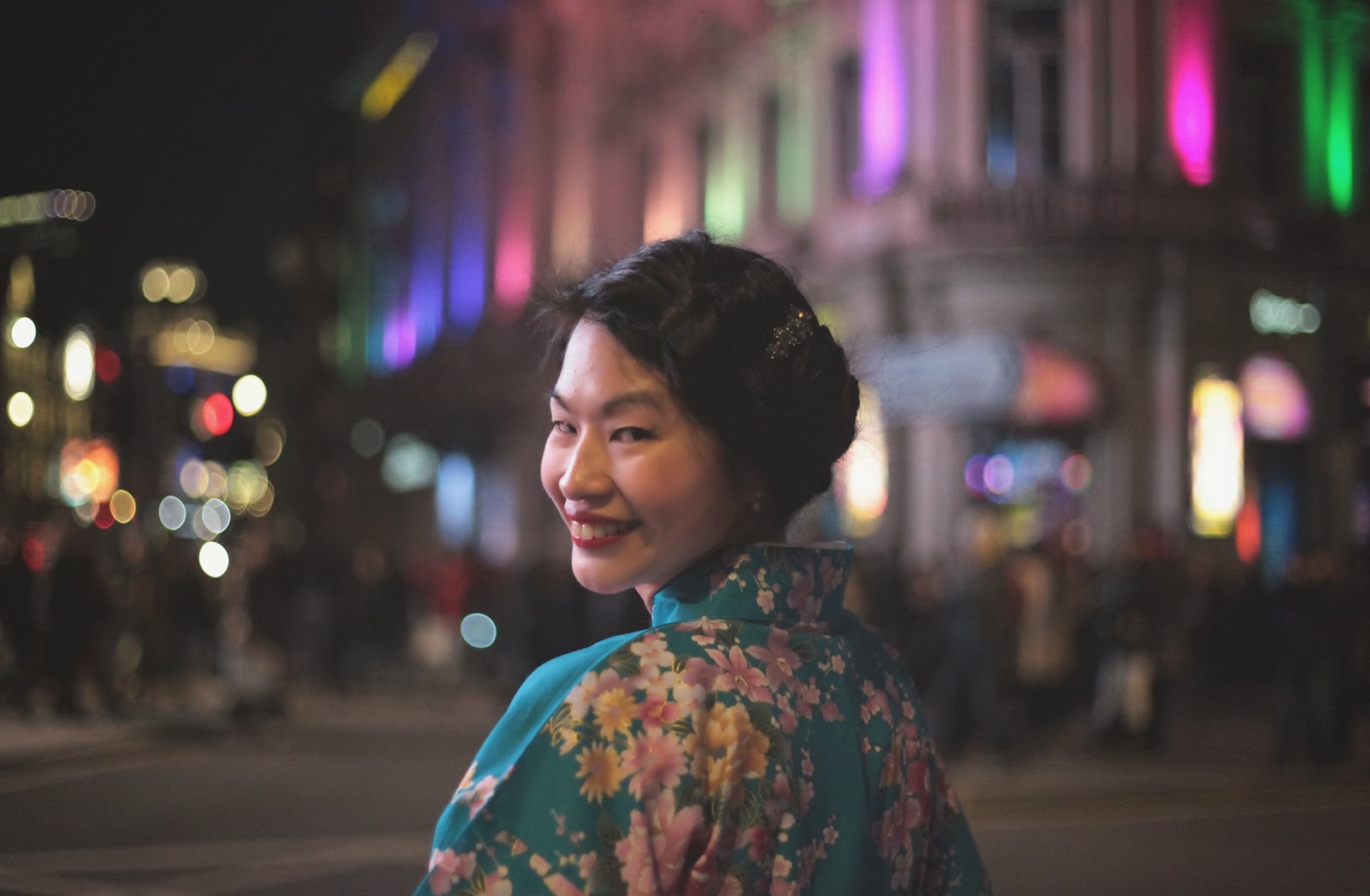