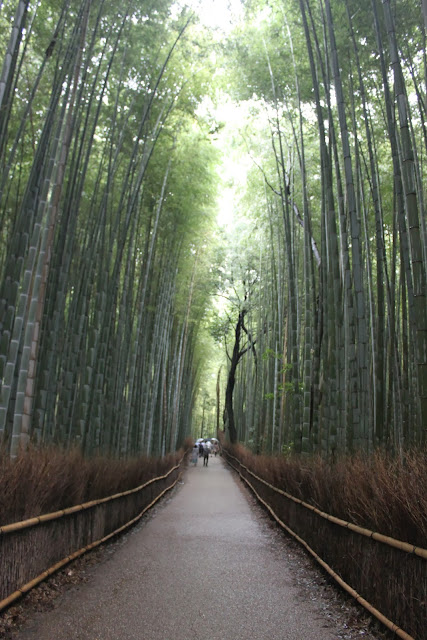 As promised...following on from Part One [Link Here] of our Japan adventure in Tokyo, I bring you darling readers to Part Two in the mysteriously beautiful Kyoto. There is most definitely something different about Kyoto that seems to entice guests in taking a glimpse of the beautiful and unique charm of a Japan that once was. As though venturing into a time warp, you just have to walk down an old stone paved path through tea houses flanking both sides or stop on an old wooden bridge to feel what must once have existed. A willingness to treasure tradition and preserve custom seems even more alive in Kyoto, that somehow dulls down the hustle and bustle of modern life in a pledge to serenity. Perhaps the existence of geisha, temples and UNESCO protection might have something to add to it....but I found Kyoto to be simply magical and my favourite amongst the three Japanese cities I visited.

First stop was a scrumptiously yummy Tonkatsu lunch, crispy deep fried pork cutlets served with an array of fresh vegetables, grounded sesame rice and specially made fruit sauces, at a restaurant nearby our hotel. Once our grumpy tummies were fed we made our way to the famous 'Kinkakuji', also knowns as 'Temple of the Golden Pavilion' in Kyoto, which was built in an age when artistic perspective was infused in building structure as well as garden landscape. Hence it became one of the protected heritage sites and has been well preserved even with the crowded groups of tourists that flood in to see the Golden Pavilion every day. Waiting our turn patiently for a space in front of the bamboo barrier beside the lake in order to take a dedicated photo with the Golden Pavilion, we were still in awe of how majestic and serene it was. Almost like the perfect moment just to dream of a different world and we didn't even mind the clamour for photo space by excited tourists all around. The gardens itself is not really that big and one could probably complete the visit within an hour, but it is definitely a place that is worth lingering for many more moments just to soak in the zen-like beauty of the majestic temple....a temple clad in gold but yet not evoking materialistic ugliness in any way is a rare gem indeed!


[To find out more about the Golden Pavilion, please click: en.wikipedia.org/Kinkaku-ji]

As the dedicated restaurant where guests have the opportunity to have dinner whilst being accompanied by a geisha was fully booked for the night, we decided to try our luck in spotting a geisha in the famed streets of Gion. [For more information on the district of Gion: en.wikipedia.org/Gion] Roaming through the stone paved paths with tea houses on both sides, we saw many young girls dressed in traditional Yukata (a cotton variation of the Kimono mainly used in the summer) walking together and stopping to take photographs of each other. A trendy craze that has encouraged the young to love their tradition more, which is almost romantic when young couples dress in their respective male and female summer attires to go on a photo date in the mythically preserved district of Gion. You will find many a photographers all lingering around for a chance to spot a geisha and take a picturesque snap. Thinking it could be time to give up and roam further ahead, I suddenly spotted a real geisha with painted white face coming out of a sliding door down a tiny alley and walked towards me. In a moment of excitement as well as panic I had the urge to get my camera ready, but that is when my sister mentioned it would be almost disrespectful to point a camera at her whilst she is just going about her daily life. It struck me that being a geisha is most certainly different from any other dancers across the globe, as being a geisha truly is a lifestyle or a way of life. Freezing in the moment as she walked gracefully past me, I suddenly spotted a photographer approaching in speed and snapped frantically away as he trailed behind her across the stone paved path. Making one last stop to the nearby place where they filmed the 'Memoirs of a Geisha' for some food and photos, we headed back to the hotel. 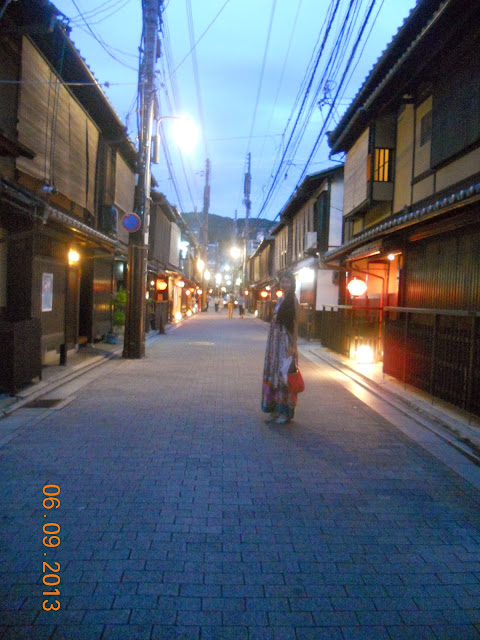 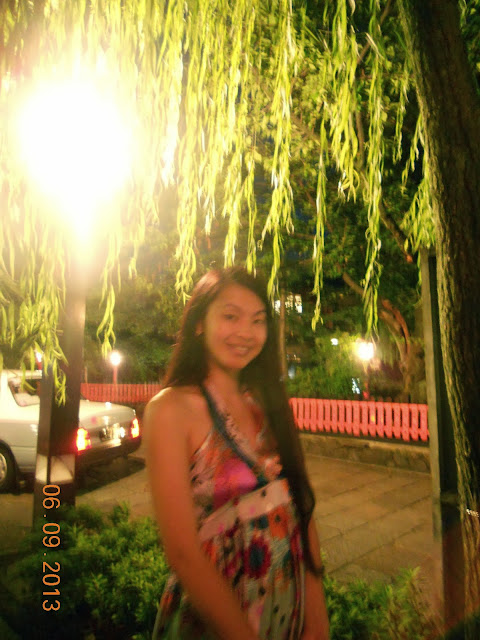 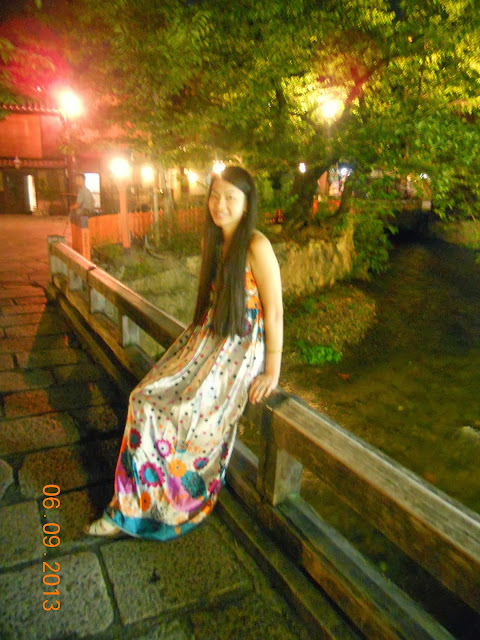 On our second day in Kyoto we decided to travel a little further out to see the UNESCO listed 'Tenryuji', also known as the 'Heavenly Dragon Temple', which leads to a magical bamboo forest. [To find out more about the Heavenly dragon Temple click here: en.wikipedia.org/Tenryuji] The ancient wooden structure is modest in a minimalistic kind of way, but the surrounding garden with a Koi filled pond and backed by the hills of nature is simply beautiful. As the rain stopped, we made our way up the hill to roam the rest of the garden and began seeing the divide that formed the magical bamboo forest. Following the path out and towards the bamboo forests, we walked speechless in a slow pace and admired the giants of nature with every step. To be reminded how small we humans were and how old the giant bamboo forest must have been...contemplative yet peaceful in a dream-like meditative trance.


[To find out more about places to see in Kyoto: www.japan-guide.com/kyoto] 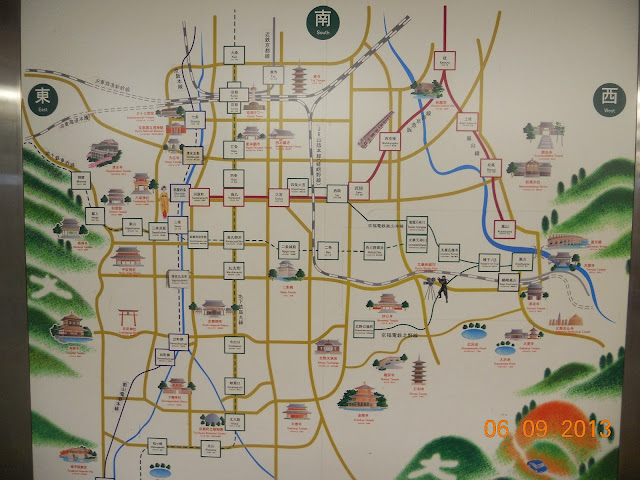 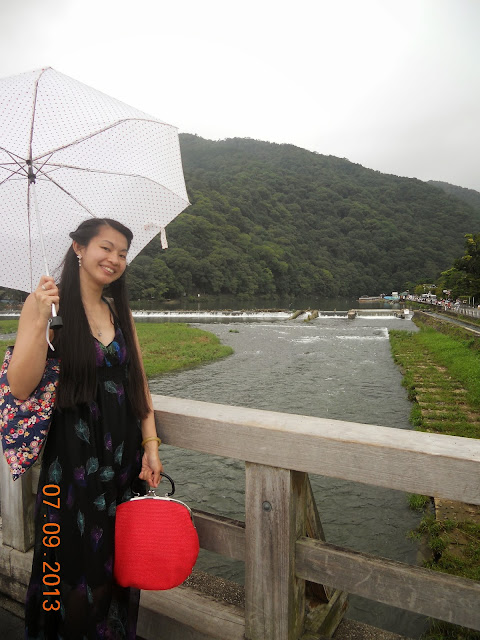 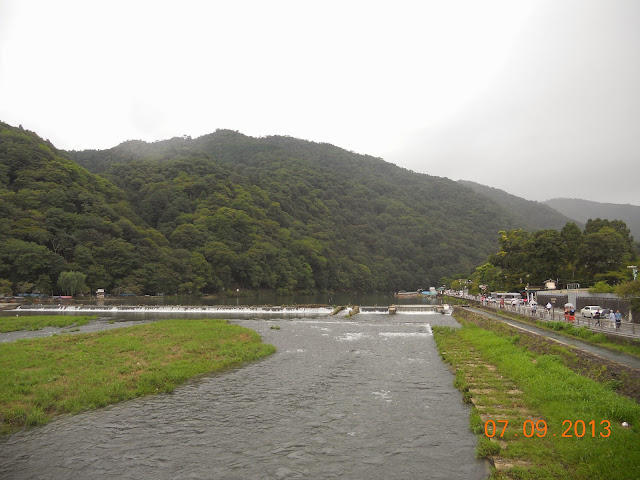 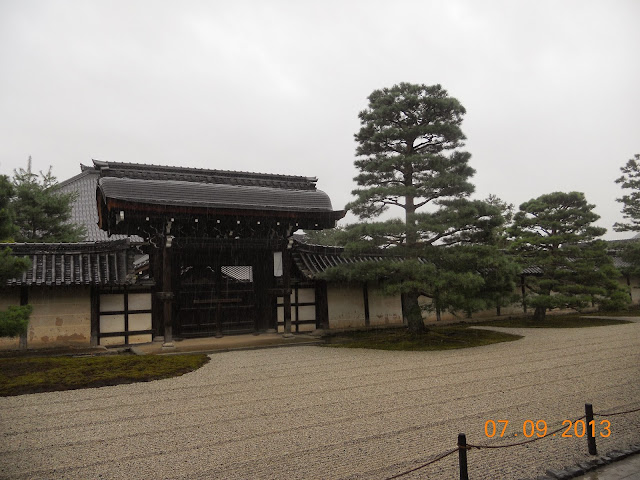 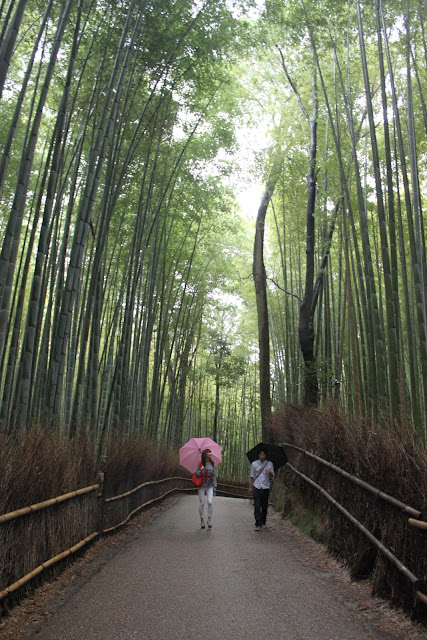 The surrounding area is lined with other smaller temples as well as shops for souvenir and food, which allowed us to stop for a bit of green tea and cake. We also went on the Saga Scenic train route which left us feeling a little bland....as the unchanging wet summer scene seemed not to be as impressive as the changing colours of autumn leaves. Anyhow, we had an amazing time in Kyoto and witnessed how the old blended with the new in perfect harmony....in other words, Kyoto is definitely highly recommended! Right, soon to come will be a very special post on a short film preview I attended recently....for the time being, have an utterly fabulous weekend my darlings!

Until the next time,
♥May xx